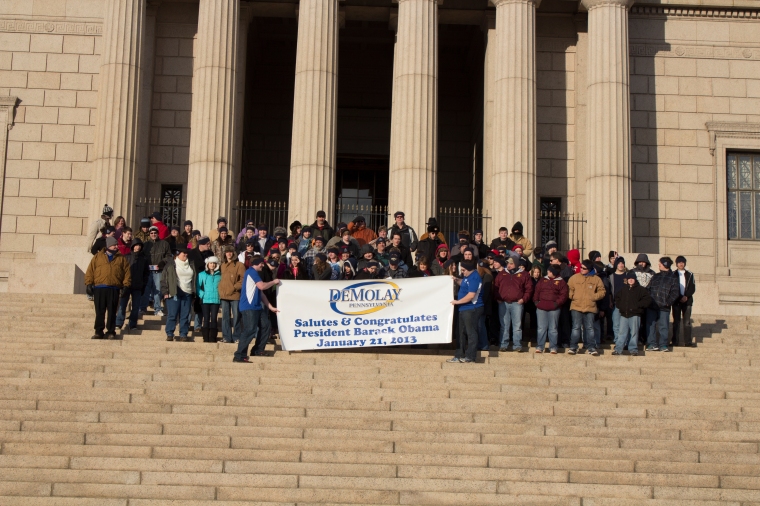 PA Rainbow joined PA DeMolay on their 2013 Inauguration Trip to Washington, DC, on January 21, 2013, to witness the second inauguration of Barack H. Obama as President of the United States. Mrs. Helen Snedden, Supreme Deputy, and Sis. Nikki Schafer, Grand Worthy Advisor. were joined by members and chaperons from Martha Assembly No. 11, Penn Valley Assembly No. 153. and Hope Assembly No. 186.

It was an early bus ride to George Washington National Masonic Memorial in Alexandria, Virginia where a picture was taken on the steps of the Memorial. From there groups were off to the Metro and an adventure of a lifetime. Some went to the parade route, others to the Mall for the Inauguration, and still others walked to many historic places including the Washington Monument, Lincoln Memorial, Arlington Cemetery, the Tomb of the Unknown Soldier, and other museums.

Thank you to DeMolay for the invitation to join in this wonderful experience and memories for a lifetime.

This site acknowledges allegiance to the Supreme Assembly, International Order of the Rainbow for Girls, whose seat of authority is in McAlester, Oklahoma, of which Reverend W. Mark Sexson was founder, as well as the Grand Jurisdiction of Pennsylvania of which Mrs. Helen Snedden is Supreme Inspector and Sister Ashley Swogger is Grand Worthy Advisor.